We are approaching a challenging, yet critical period in our fight against COVID-19— vaccination. It is a long-awaited glimmer of hope after a prolonged darkness, but the return to normalcy it promises is not unconditional. Achieving herd immunity through vaccinating a sufficient percentage of the population poses not only logistical and political challenges, but social and economic ones as well. Individual decisions to vaccinate will play a significant role in our trajectory toward ending this pandemic.

Traditional epidemiology models—or models of infectious diseases—assume that vaccination rates are predetermined by a social planner or distribution system. In other words, individual decisions to vaccinate have no influence on overall vaccination rates. Fordham College at Rose Hill senior Andrew Souther, in conjunction with Professor Troy Tassier of the economics department, has constructed a new methodology for analyzing vaccination that accounts for the individual decision-making process. Recognizing there are social, cultural, and religious factors at play, Souther and Tassier postulated that economic factors might also have a discernible effect on individual decisions to vaccinate.

To examine the nature of the economic forces that affect perceived disparities between urban and rural decisions to vaccinate, Souther and Tassier developed a complex computational economics project in two stages. First, they analyzed empirical data and research on U.S. influenza vaccination rates to determine the prevailing ideology behind regional vaccination discrepancies. Among these, include vaccine distribution, healthcare, and poverty. In the second stage, the team employed an agent-based model to introduce the element of economic, or game-theoretical, rational choice.

Using Python, they coded a simulation of thousands of agents (or individuals) in either urban or rural regions, to have strategies to decide whether or not to vaccinate. Each agent has a social network, also known as friends, with whom they are in frequent contact. In urban areas, social networks are denser than in rural areas. Next, an epidemic was introduced by infecting a small number of agents and was coded to proceed according to the SEIR epidemic model—a compartmental model that tracks the flow of individuals through susceptible, exposed, infected, and recovered states using mathematical formulas. The team ran the simulation over several seasons and based on how the epidemic played out in a previous season, agents performed risk calculations to determine whether to vaccinate in the current season. Souther and Tassier gathered a sense of how vaccination occurs across urban and rural regions by running the simulation over multiple seasons and modifying agent social networks.

Overall, Souther’s and Tassier’s research revealed the fascinating dynamics of how different populations respond to the availability of vaccines. Their study suggested that there are economic forces involved in the creation of observed disparities in regional vaccination rates. Their initial hypothesis was confirmed: Urban agents (or individuals who are packed into denser social networks and thus have more potential for exposure) are more likely to get vaccinated than rural agents. But by tweaking elements of the simulation, the team also had some unexpected findings. For instance, when they increased the cost of the disease, urban agents did not increase their vaccination rates, but rural agents did; changing the size of the regions did not affect vaccination rates and as the density of urban areas was increased, the disparities became more extreme.

U.S. vaccination distribution and pandemic policy can benefit greatly from the nuances outlined in Andrew Souther and Professor Tassier’s study. Their research can help policymakers discern where the greatest demand for vaccines will be and where to target vaccination campaigns to increase inoculation rates. As a result, we can stay on track to defeat this pandemic and sooner achieve the sense of normalcy we all desire. 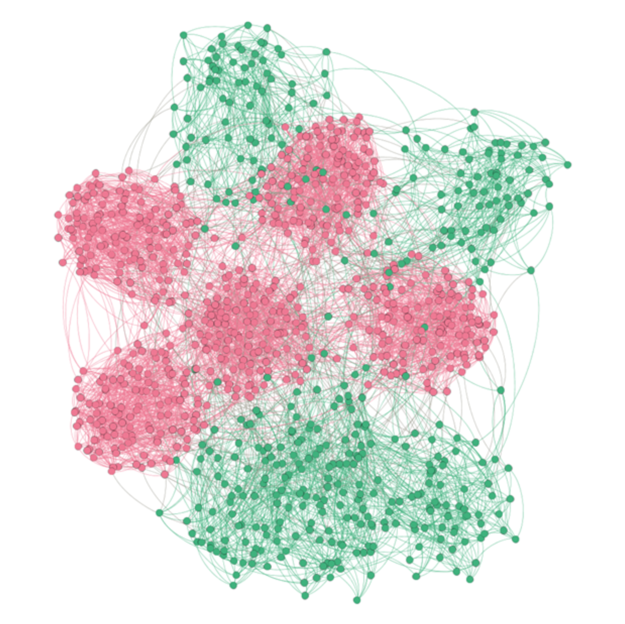 In this visualization of agent social networks, urban agents are represented by the pink dots and rural agents by the green dots.